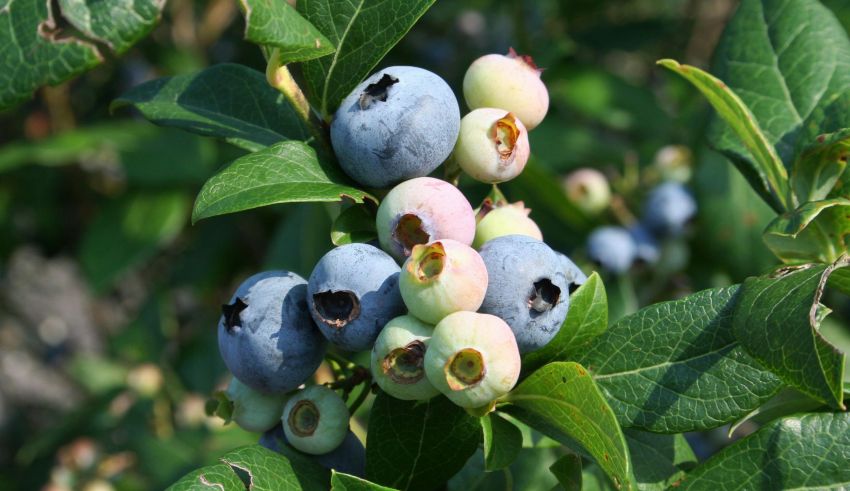 U.S. fresh blueberries was one of several U.S. agricultural products that received new or expanded access under the U.S.-China Economic and Trade Agreement, which was signed on January 15, 2020. This report briefly outlines the market conditions, access regulations, and market entry recommendations for U.S. blueberry exporters. Since consumers have become much more familiar with blueberries recently, exporters are encouraged to take note of consumer expectations for size, color, and brix content. Smaller packages of about 125g are considered the most convenient to purchase, and appropriately sized, for Chinese consumers.

Blueberries are not a traditionally consumed fruit in China, however a higher standard of living and an increased awareness of the health benefits from consuming fruit, have led more consumers to seek out new fruits, such as blueberries. Consumers tend to consume blueberries fresh, however they are also consumed in dried snack foods, such as a snack mixture of other dried fruits and tree nuts, or as a standalone snack product. Blueberries are also increasingly being processed into purees and other concentrates for use in processed dairy products, beverages, and yogurts. Chile and Peru are the largest fresh blueberry exporters to China. Fresh blueberries for direct consumption are cultivated based on their brix level (sugar content) and skin composition. Chinese consumers tend to prefer larger blueberries with relatively higher brix levels; a good appearance, firm texture, and longer shelf-life.

According to a May 21, 2020 U.S. Department of Agriculture, Animal Plant Health Inspection Service (APHIS) announcement, APHIS and China’s General Administration of Customs (GACC) signed a work plan in May 2020 outlining measures U.S. producers must undertake to export blueberries to China. Fresh blueberries from Florida, Georgia, Indiana, Louisiana, Michigan, Mississippi, New Jersey, and North Carolina may be exported to China after treatment. In addition, blueberries from California, Washington, and Oregon to China may be exported “using a systems approach.”

More than 70 percent of domestically produced blueberries in China are consumed fresh. Until 2011, blueberries were traditionally supplied to high-end markets due to lower domestic production and limited imports. As consumer awareness increased and domestic production grew, prices became more affordable for the middle-class. June and July are the peak harvest season for domestic blueberries. Retail prices of domestic blueberries were about $4.00/kg in June and July 2019 and reached a low of $2.00/kg in late July 2019.

In 2012, China opened its market to imported blueberries from several countries, including Chile, Mexico, Uruguay, Canada, and Peru. Chile and Peru account for over 99 percent of the import market due to free trade agreements and opposite harvest seasons. Blueberries from these two countries are not assessed tariffs compared to the 30 percent most-favored nation (MFN) rate. All other exporters pay the MFN import tariff rate. The peak import sales season is January and February, because these months are the off-season for domestic production and there is strong demand for fresh fruit during China’s Spring Festival holiday period.

Chile and Peru are the leading blueberry exporters to China. Because South American producers have a different harvest season for fresh blueberries, Chinese domestic blueberries primarily compete directly with U.S. blueberries due to having similar harvest seasons. In September and October, domestic blueberries are nearing the end of the season and quality drops sharply, while South American blueberry quality is also at the low end. Blueberries are also now being exported from British Colombia, Canada, but production is low and cannot satisfy market demand. The future market is moving toward higher quality imported blueberries with stable supply and a sweet taste. 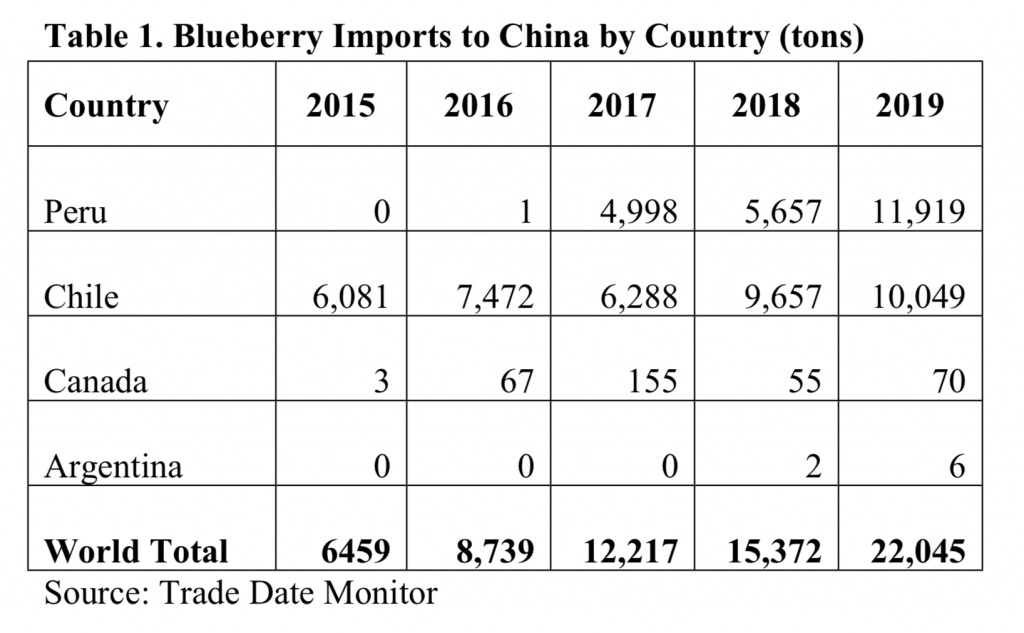 Growing blueberry consumption is driving expanded domestic cultivation with production increasing from 14,000 tons in 2012 to 180,000 in 2018. Shandong, Guizhou. and Liaoning provinces are the primary producing areas. Industry experts forecast domestic production could exceed one million tons by 2026, surpassing North America as the world’s top producer. Large fruit producers, including Driscoll’s, Costa, Hortifruit, and SA Berry Fruit have made considerable investments in China to cultivate blueberries and other berry fruits. Domestic producers have begun to invest in different varieties which offer improved aroma and a balance of sweet and tart flavors. 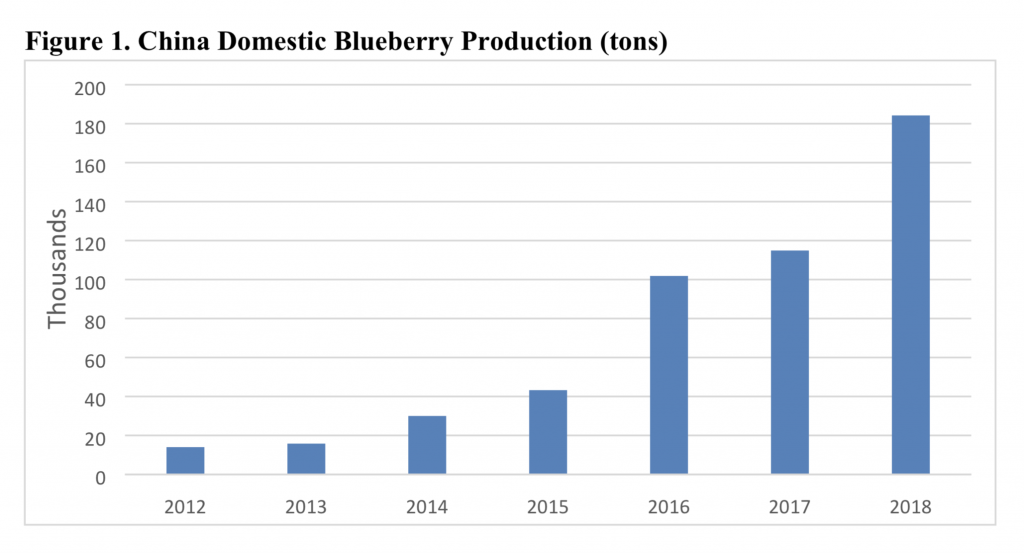 Producers are expected to adhere to GACC’s phytosanitary import requirements. According to GACC’s May 13, 2020, Number 64, announcement, blueberries must come from packing houses or shippers registered and approved by USDA APHIS. All shipments must be accompanied by a phytosanitary certificate issued by USDA APHIS. Fresh blueberries from California, Florida, Georgia, Indiana, Louisiana, Michigan, Mississippi, New Jersey, North Carolina, Oregon, and Washington are eligible to export to China. All exports, except those from California, Oregon, and Washington will need to be fumigated prior to export to China. Specific import regulations are subject to change. Exporters are encouraged to check with their Chinese importer, and USDA APHIS by reviewing their Phytosanitary Export Database (PExD) to confirm the most current import-export regulations.

Guangzhou and Shanghai are the predominant fresh fruit import destinations as they have the most efficient customs processes, are situated on popular ocean freight routes, and have well established domestic transport networks. Fresh fruit imports have traditionally been handled by importers and regional distributors, however large retail chains with advanced logistics and transport efficiencies are increasingly seeking to source directly from exporters and importers to eliminate distributor networks. Retail outlets typically use free tastings, gift boxes, colorful displays, and nutritional information to expand sales of fresh fruits. 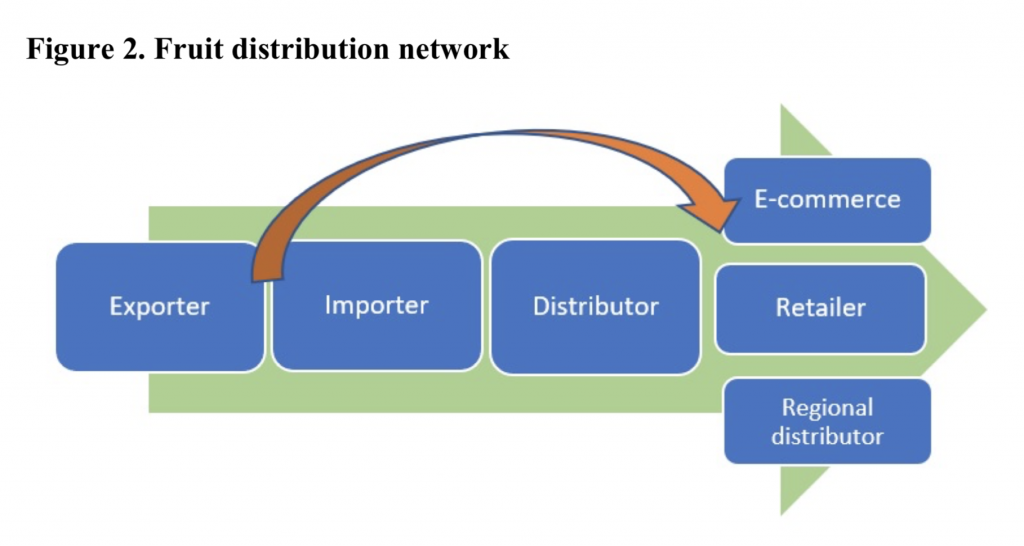 Fresh blueberry exporters should also pay attention to how e-commerce platforms are gaining market share and changing the traditional importer-distributor-retailer network. Beginning in 2014, e-commerce platforms started focusing on offering fresh food to consumers. E-commerce fresh product sales grew 42 percent, exceeding $2.9 billion in 2018. Major platforms, such as Tmall, JD, and MissFresh enjoy first- mover advantages on traffic and sales, but there are many other niche platforms, such as Benlai and Chunbo that focus less on volume and more on brand recognition and an improved customer experience. E-commerce contacts reported that the industry has been reluctant to directly import fresh berries due to logistical challenges and cost, although some have air shipped orders to fill the gap when the domestic harvest season ends and South American blueberries have not yet arrived by ocean freight. Most platforms still choose to work with importers or distributors to ensure that products are fresh and reduce their risk for loss of these highly perishable products. Contacts also reported that blueberries, if not cautiously handled in delivery, can result in a very high customer complaint rate, therefore they only seek to source products with a firm texture.

Asia Fruit Logistica is the largest Asian fruit industry show. This year, it will be held in Singapore, September 16 to 18, 2020 (it is usually held in Hong Kong, however the organizers moved it to Singapore due to COVID-19). Each year the China Chamber of Commerce of Import & Export of Foodstuffs, Native Produce & Animal By-products (CFNA) organizes the International Fruit Conference, which focuses mainly on the China market. In 2020, it is expected to be held sometime in in September to December, pending COVID-19 developments. For more information about the conference, please contact chinafruit@cccfna.org.cn.

China’s Chamber of Commerce of Import and Export of Foodstuffs, Native Produce ,and Animal By- Products (CFNA) is the primary food trade industry association in China. It was established in 1988 under the Ministry of Commerce and with a membership exceeding 6,500 companies. CFNA organizes fruit industry conferences and activities and publishes industry data. They also serve as the primary facilitator between the Chinese government (e.g., GACC) and importers. The key CFNA contact for fresh products is Mr. Lu Kun, lukun@cccfna.org.cn.

The China Agricultural Wholesale Markets Association (CAWA) is a national association established in 1968 under the Ministry of Commerce. In China, more than 70 percent of agricultural products are distributed through wholesale markets. CAWA has China’s largest 300 wholesale markets as its members, and the largest five wholesale markets in each province. CAWA organizes conferences and national/regional trade shows. The key CAWA contact is Ms. Wang Lijuan at wanglijuan@cawa.org.cn or international@cawa.org.cn.

Attractive size, packaging, and sweet flavored varieties will help U.S. products gain market share in China. To meet market demand, Chile and Peru have been able to provide appropriately sized blueberries, setting the standard for consumer expectations. U.S. blueberries are expected to be in highest demand after June when Chinese production drops and South American products have not yet arrived in the market. In China, blueberries are generally graded into three levels; 12 to 14 millimeters (mm), 14 to 16 mm, and 16 mm or more. Products are typically sold in 125 gram (g) packages. These smaller packages are convenient to purchase and appropriately sized for smaller Chinese families. Exporters may also highlight the size and high sugar content on the package (and to importers during sale discussions). Importers are expected to seek U.S. varieties which are over 12 degrees brix and larger than 16 mm. 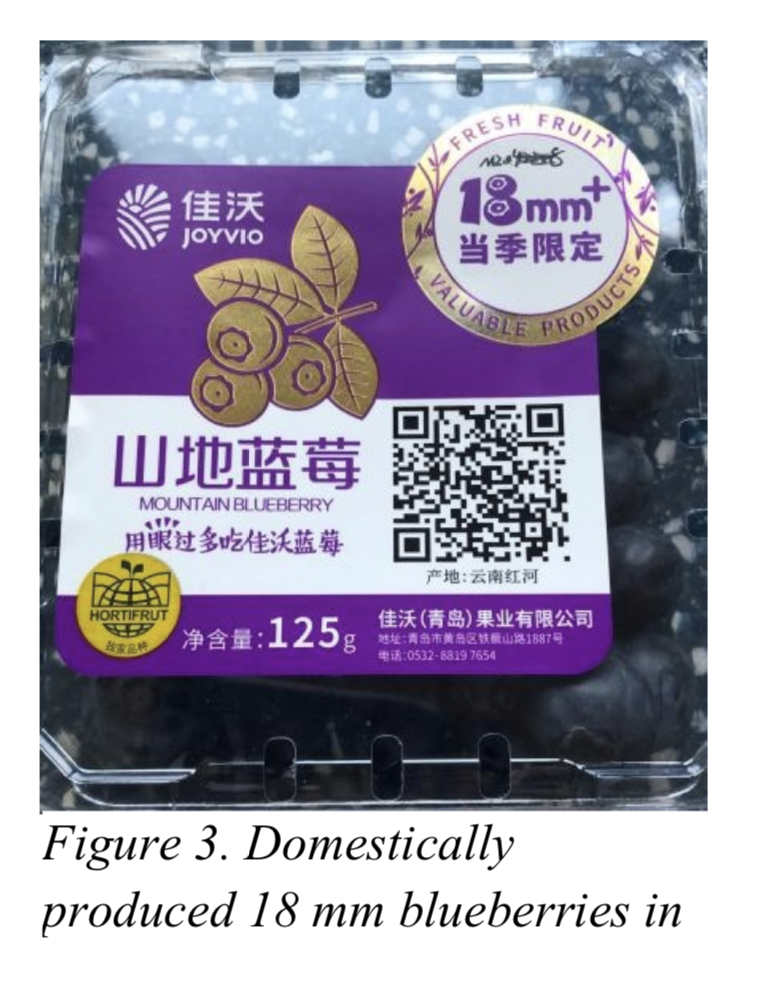 While this report focused on fresh blueberries, food processors are also seeking dried and frozen berry imports for use in dairy beverages, bakery products, and snack foods. Please refer to most recent USDA FAS GAIN China Food Processing Ingredient Report for more information about opportunities for frozen and processed blueberries.

According to the April 28, 2016 Foreign Non-governmental Organization (FNGO) Management Law, China requires all FNGOs, including agricultural trade and marketing associations, to register before undertaking certain marketing activities (e.g., public gatherings, promotions, trainings, conferences). The requirements include securing a Chinese sponsor organization, and registering a permanent office or filing for a temporary activity permit. This process typically takes up to six months to complete. Certain activities may exempt from this law, and it does not apply to for-profit businesses and governmental organizations. For more information about the Law, see the USDA GAIN report China’s Foreign NGO Management Law: A Review for U.S. Agricultural Trade Associations. — By Christopher Bielecki, USDA Foreign Ag Service