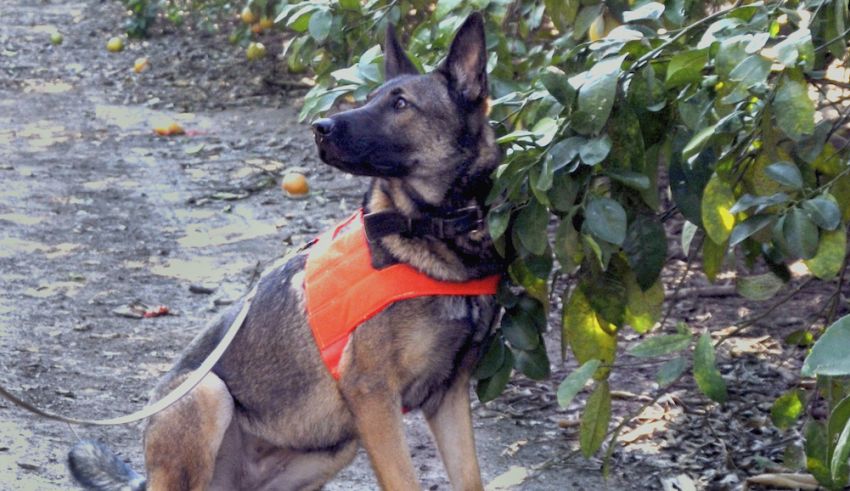 During an orchard review in Texas, expert detector dog, Mira alerts her trainer by sitting next to a citrus tree infected with Huanglongbing (HLB).

The disease, which has no known cure, is caused by a bacterium that devastates citrus plants and is transmitted by psyllids (small plant-eating insects resembling lice) that carry the bacteria from tree to tree or by the grafting of infected plant material. Common symptoms of infection include blotchy mottling of entire leaves, premature defoliation of the tree, and fruits that are usually small, with green peel at the bottom and a bitter taste. Unfortunately, these visible signs of HLB do not manifest until months or even years after the initial infection. By then, it is too late for citrus growers to save their crop from a mass infestation.

However, the Farm Bureau of Ventura County found a rather unconventional way around this problem.

To contain the infected trees and prevent a citrus epidemic, the Farm Bureau decided to hire a team of detector dogs specially trained to find HLB bacteria. The dogs are a result of a unique program funded by USDA and run by Agricultural Research Service (ARS) Research Leader and Plant Pathologist Timothy Gottwald (now retired) at the U.S. Horticultural Research Laboratoryin Fort Pierce, FL.

First, the clever canines patrolled the perimeter because the edges of a grove are where the disease would first accumulate. Then, they trotted through the grove of trees to ultimately identify over 200 infected trees from a grove of 3,500.

According to Gottwald’s research, the canine-detection method has an accuracy rate of 99 percent. While humans need several minutes to visually examine each tree and collect samples for laboratory testing (which requires considerable lab time and supplies), the dogs can travel through groves of trees in mere minutes, sensing HLB-infected trees by smell faster and far more easily. The time saved in finding the disease earlier gives citrus growers the opportunity to remove and destroy or quarantine HLB-infected trees, controlling what could’ve been a severe outbreak and loss of crop.

However, there are still some considerations to keep in mind when deploying the canines as an early detection technology. Each dog team can only work 30 minutes at a time before they must rest, and a new team takes over. Teams can work for about 6 hours a day. In addition, much like any lab equipment, dogs are periodically calibrated to the HLB “scent signature” to remain finely honed optimized detectors.

Still, the dogs are more sensitive and accurate than any other available technology in the field. The employment of detector dogs is still a voluntary program, which means fruit growers and farmers have the choice to either use dogs to find HLB early or continue using a USDA-approved DNA test called polymerase chain reaction (PCR).

“While PCR is an effective way to detect infections, it isn’t efficient,” Gottwald explained. “It’s difficult to pinpoint incomplete infections—or infections that are only on one part of a plant (for example, a single leaf out of an entire tree with possibly thousands of leaves)—using PCR because it requires numerous samples from all over the suspect specimen.”

“On the other hand,” Gottwald continued, “detector dogs identify pathogens ‘holistically,’ easily locating minute infections regardless of what small part of the tree they are infecting.” With this increased scope and accuracy rate, Gottwald and his colleagues believe that the canines’ abilities will revolutionize how growers protect their crops.

“These specially trained canines may also be used to detect diseases and infections in other fruits and vegetables, such as grapes, peaches, plums, and tomatoes,” he said. “Our research has shown that they can sense pathogens like plum pox virus or squash vein yellowing virus, which both can cause severe economic losses to agriculture industries.”

The canine-detection method was validated in blind tests by USDA ARS in collaboration with the California Department of Food and Agriculture, with results published in 2020.— By Georgia Jiang, USDA-ARS