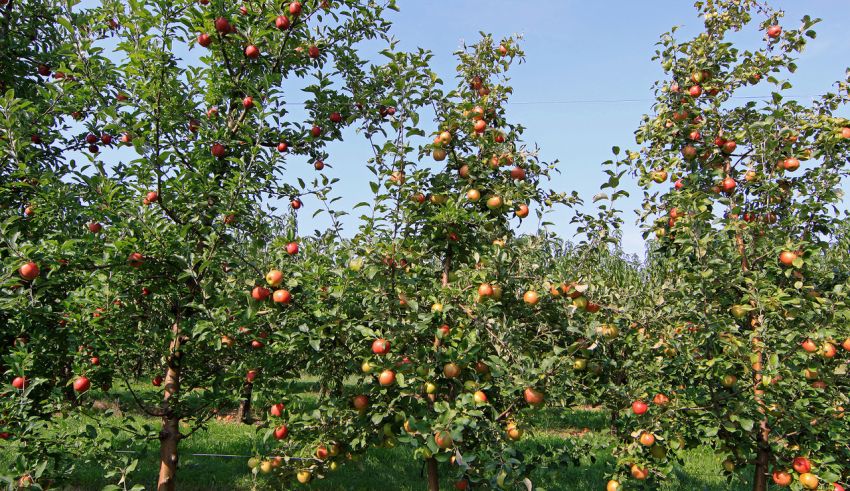 A test tree with G.890 apple rootstock was grafted to see how well it produces Honeycrisp apples. (Photos by Gennaro Fazio)

Move over Johnny Appleseed! Orchards of healthier trees are taking root – and not only do these trees stay healthier when exposed to disease, but they also create the right sized tree for modern apple production across the United States.

Apple orchards today can produce about 10 times more than they did 100 years ago, thanks to researchers at the Agricultural Research Service (ARS) Plant Genetic Resources Unit in Geneva, New York, and their partners at Cornell University. While the fruits of their labor are easy to see and taste, their most impressive work is underground.

Since 1969, researchers have been developing and improving new root systems, called rootstocks. Producers graft the apple tree of their choice to these rootstocks to create apple trees that are immune to certain diseases and insects, are the right size for their orchard, and are more productive than older rootstocks. In the lab, their rootstocks have quirky names like 75O3R5-214; commercially, it’s called G.214, where “G” stands for Geneva, a registered trademark representing a series of disease-resistant apple rootstocks.

The right-sized tree is important when planting a modern orchard because farmers increasingly depend on robotics and other technology to operate at peak efficiency. Unlike backyard apple trees that grow tall and round, today’s production orchards looks more like a series of fruit walls. Geneva rootstocks help create these walls by dwarfing the scion – the portion of the tree that is above ground – so the trees are shorter, which makes the fruit easier to reach and safer for pickers to harvest. Growing shorter trees in neat rows also allows for easy passage of harvest machinery.

An apple orchard has a productive life span of 12-20 years, so farmers routinely uproot and replace 5-10 percent of their trees every year. In addition, trees need to be replaced in orchards that have been devastated by fire, disease, and insects. With about 500 million trees in the industry inventory, nurseries need to produce 20-25 million trees per year just to keep pace. Besides growing new rootstock plants from layer bed cuttings, the primary method for producing new rootstocks is cloning through micropropagation. Micropropagation starts with a very small stem, sometimes about 1/10th of a millimeter, that is grown in sterile conditions and fed from a nutrient-rich culture medium. A cloned rootstock is identical to the original plant so they are more consistent in their disease resistance, dwarfing effect, cold-hardiness, and enhanced productivity. Nurseries that produce rootstocks can also make more of them faster, which means they can keep up with the high demand for Geneva apple rootstocks. These protocols are now in several other countries, including Spain, Brazil, Chile, Morocco, and South Africa, where tens of millions of Geneva rootstocks have been produced by micropropagation.

As successful as Geneva rootstocks have proven to be, there is no such thing as a one-size-fits-all rootstock because soil and other environmental conditions vary by region – and sometimes even within the same region. With this in mind, researchers at ARS and Cornell continue to root out the mysteries of plant genetics so they can further improve Geneva rootstocks or create new and even better ones. – By Scott Elliott, USDA-ARS