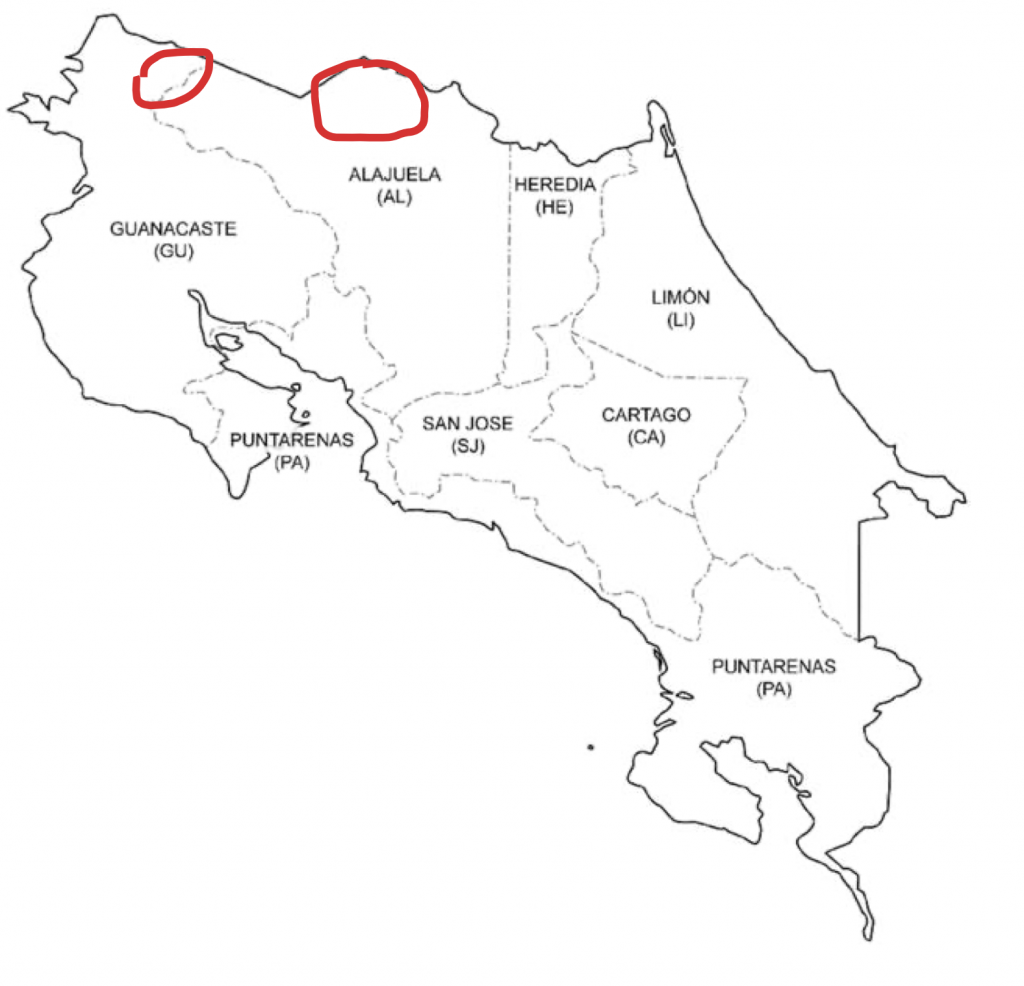 Two companies, TicoFrut and Del Oro, control most of the production and practically all processing of oranges in the country. TicoFrut is the largest company in the sector. TicoFrut’s plantations are located primarily in the province of Alajuela (near the border with Nicaragua) and in Nicaragua. Oranges from the Nicaraguan plantations are trucked across the border in Los Chiles for processing at TicoFrut’s plant located in Muelle, San Carlos, about 50 miles to the south of the border. Del Oro’s plantations are in the province of Guanacaste, near the border with Nicaragua. Oranges are also grown in other regions of the country including Acosta (near the Central Valley) and Nandayure in Guanacaste. However, oranges from those areas are mostly sold as fresh fruit in the local market.

There are also some medium and small size independent producers near the areas where the two processing plants are located. While the larger operations have been stable and plan their activities with a longer-term view, the smaller independent producers tend to supply the processing market (rather than selling into the fresh fruit market) in response to short-term price fluctuations. Smaller producers have also been exiting orange production altogether over time as orange yields and orange prices have made other activities more attractive.

Harvest is mainly from January to May, with peak production in March and April. The vast majority of commercial oranges are processed for juice concentrate for the export market. A relatively small volume of fresh fruit is sold for local consumption, and processing plants also sell small volumes of juice to local food processors for branded products and for further processing.

TicoFrut has orange plantations in Nicaragua, near the border. Growing conditions are favorable in that area, and land prices and labor costs are generally lower. Costa Rican processors have partnered with Nicaraguan businesses to plant orange groves in Nicaragua for processing in Costa Rica. According to data from the Government of Costa Rica, the country imported 69,800 metric tons (MT) of fresh oranges from Nicaragua in 2020, compared to 56,644 MT during 2019. Imports from Nicaragua during 2021 reached 66,444 MT through October. 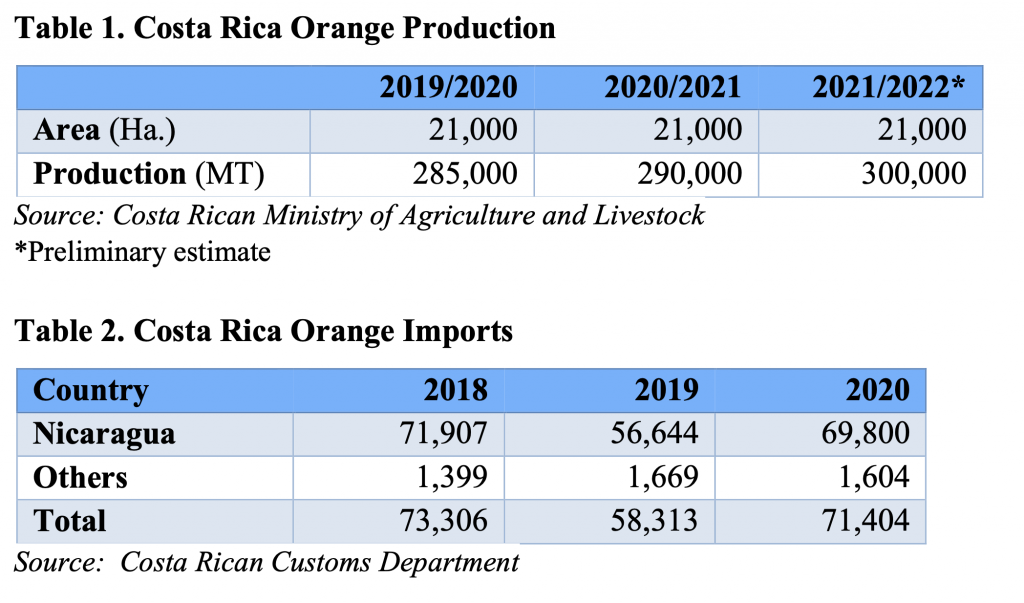 Within orange area planted, farmers are gradually increasing the number of trees per hectare by using the “Flying Dragon” pattern, which supports higher tree density, easier farm management, and lower costs per hectare. This innovation has allowed farmers to significantly increase tree density, moving up from 300 – 450 trees/ha under traditional planting patterns to 800 to 900 trees/ha with the Flying Dragon. FAS/San José anticipates major growers to direct investments toward replanting existing area with new trees and new patterns, rather than increasing area planted, in the near- to medium-term.  Local industry estimates area planted at around 21,000 hectares (ha) and 7.4 million orange trees, including the area planted on the Nicaraguan side of the border. With reports of reductions in area planted to oranges – as citrus greening disease changes yields and profitability calculations – FAS/San José expects area planted to remain flat or decline slightly in 2022 as the effects of citrus greening persist and as major growers concentrate on improvements to current production areas through replanting and irrigation investments.

Citrus greening disease was first identified in Costa Rica in 2011 and remains a major concern for producers. Citrus greening is reportedly endemic throughout most of the country’s growing areas, increasing costs, decreasing yields, adding uncertainty to future production plans, and limiting growth of production area and volumes. The largest farms have had some success mitigating the effects of the disease by establishing strict controls, including constant farm surveillance, inspection of all farms, and eradication of 100 percent of affected plants. Better capitalized producers use agrochemicals and biological controls (a wasp, called tamarixia radiata, that feeds on the vector of the disease) as part of their preventive measures. The disease has reportedly caused production area to be reduced or abandoned, but FAS/San José has not been able to confirm the extent. Smaller producers, less capable of and less likely to invest in agrochemicals and biological controls, have reportedly suffered heavier losses.

FAS/San José forecasts total production to increase by 3 percent to 300,000 MT in MY 2021/2022. The largest farms have stabilized production levels through consistent citrus greening management over the last few years, resulting in smaller overall production fluctuations. In 2020/2021, the sector benefited from a more predictable, formalized government migration process for temporary laborers during the pandemic. Securing imported labor supplies was crucial not only for the 2021 harvest, but also for agricultural management practices earlier in the growth cycle (e.g., during flowering) that require imported labor. According to industry sources, fuel and fertilizer costs have increased approximately 30 percent in 2021, adding to the not insignificant additional costs of managing citrus greening – agrochemicals, integrated pest management, and eradication of affected plants.

Costa Rica exports most of its orange production as frozen concentrated orange juice (FCOJ); single strength fresh orange juice exports represent less than 25 percent of total export volume. According to information from the Costa Rican Trade Promotion Board (PROCOMER), calendar year 2020 juice exports to all destinations amounted to 21,800 MT (valued at $34.6 million), down considerably from 32,897 MT (valued at $50 million) in 2019. Trade data through October 2021 show total exports rebounding to 30,819 MT and $42.9 million, respectively. 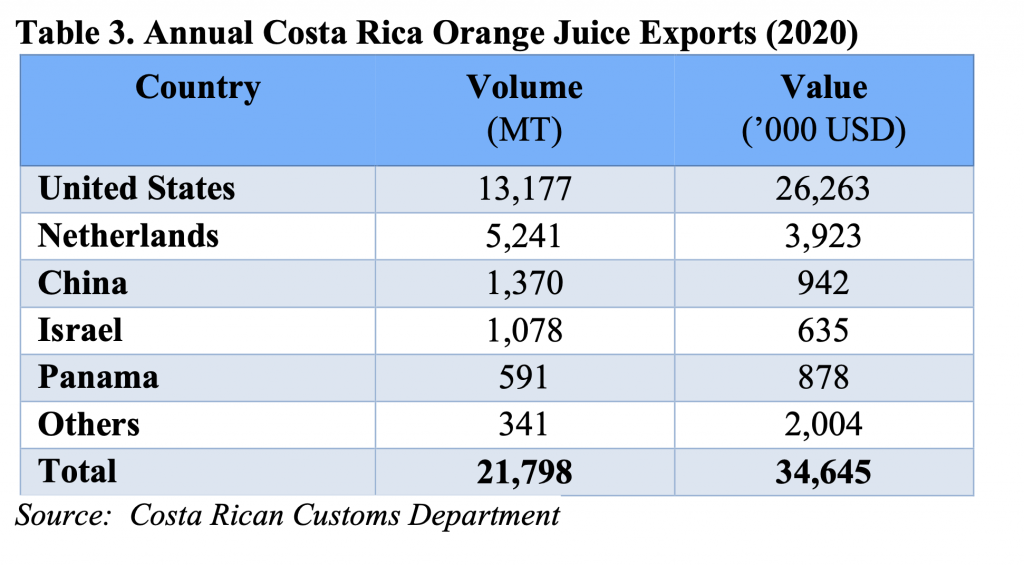