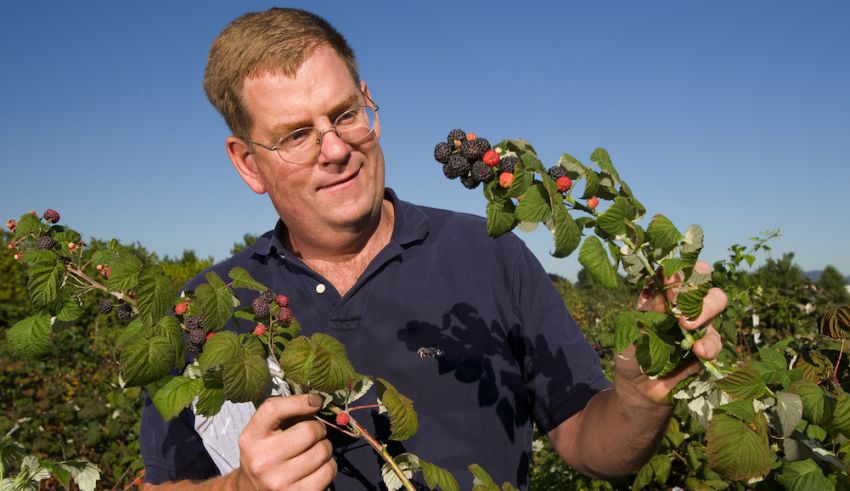 Two scientists have earned a place in the Agricultural Research Service (ARS) Science Hall of Fame for their pioneering and impactful research in small-fruits breeding and remote sensing for improved irrigation water scheduling.

Chad E. Finn (posthumously) and William P. Kustas will be inducted in a virtual ceremony today rather than a physical event due to ongoing COVID-19 safety precautions. ARS established the Science Hall of Fame in 1986 to honor senior agency researchers for outstanding, lifelong achievements in agricultural science and technology.

A plant geneticist at the ARS Horticultural Crops Research Laboratory in Corvallis, Oregon, Finn, who died December 17, 2019, is being posthumously honored for his outstanding and sustained contributions to the advancement of small-fruits crop research. His accomplishments include the development and release or co-release of more than 57 blackberry, raspberry, blueberry and strawberry varieties, some of which have become industry standards generating more than $450 million in fruit and plant sales over the past 10 years.

Finn’s research endeavors have led to a small-fruits germplasm program that’s considered among the world’s most diverse and extensive, spanning several genera of plants including Rubus, Fragaria, Vaccinium and Actinidia. His discoveries provide a greater understanding and characterization of wild species in these genera as well as their importance as novel sources of genetic variability and useful traits such as aphid resistance and fruit processing quality.

Finn also led an international black raspberry research project that developed a draft black raspberry genome—the first in the genus Rubus. Similar genomic efforts are underway in other berry crops. Throughout, he was a mentor to graduate students, avid presenter and participant on numerous committees and associations.

Kustas, a hydrologist at the ARS Hydrology and Remote Sensing Laboratory in Beltsville, Maryland, is being honored for scientific accomplishments that include using satellite data with computer models for mapping evapotranspiration (ET)—the process of plant water use through transpiration and water loss or evaporation from the soil.

In addition to monitoring ET, plant stress and drought, other applications of the models arising from Kustas and colleagues’ pioneering research include precise targeting of irrigation water to crops, including the vineyards of E&J Gallo Winery in California’s Central Valley. There, as part of the Grape Remote-sensing Atmospheric Profile and Evapotranspiration eXperiment (GRAPEX), Kustas and collaborators from NASA, Utah State University, University of California-Davis and Gallo are helping the winery better track soil and vine moisture levels with a view to reducing irrigation water use by up to 25 percent. Potentially, this reduction could translate to significant economic savings as well as contributing to sustainable groundwater management—a benefit the GRAPEX team expects could apply to other Central Valley vineyards as well as California’s nut orchard industry, which spans 1.5 million acres. “ET Toolkits” resulting from the project are also being readied for use in other water-limited western states.